For fans of Scandinavian crime such as Jo Nesbø or Stieg Larsson, with a supernatural twist.

“Dark, gripping and wonderfully stark” – Lee Jing-Jing, author of If I Could Tell You.

Read more about the novel 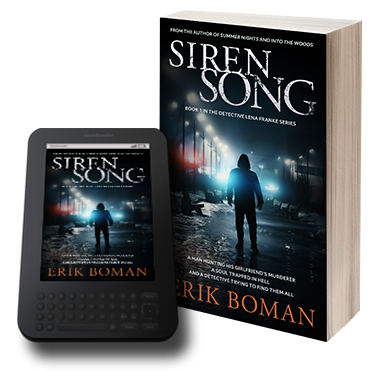 For fans of Scandinavian Crime such as Jo Nesbø or Stieg Larsson — with a supernatural twist.

“Dark, gripping and wonderfully stark”
– Lee Jing-Jing, author of If I Could Tell You.

Detective Lena Franke at the Stockholm Police Department has a knack for solving crimes. But her methods are unpopular, most of her colleagues dislike her, and her violent past hangs over her every waking hour like a grim, unyielding shadow.

When a woman is brutally killed in the western suburbs, Lena’s life becomes even more complicated. The investigation seems straightforward, but soon turns more thorny and dangerous than anyone expects.

Lena chases the merciless murderer down Stockholm’s icy streets, but she’s running out of time and clues. And there’s more at stake than stopping a savage killer.

Because Lena is haunted by forces from beyond the veil of reality. Forces that hunger for her life — as well as her sanity.

When two people are murdered in a normally peaceful and sleepy suburb, Detective Lena Franke is roped in to find the killer, even though most of her colleagues consider her a liability.

There is no apparent motive, witnesses or trace, but a discovery near the house turns the case into a baffling mystery. And the murderer is only getting started.

Along with her meticulous and disciplined colleague, Lena races across Western Stockholm in search of clues. Before long, the hunt for answers reveals an dark enigma larger than anyone expects.

The mystery might push her over the edge — because some will do anything to make sure that the past stays quiet, and Lena soon begins to suspect that the killer isn’t her greatest problem.

A seven-year-old girl with a life-threatening disease disappears from a small, quiet village in Northern Sweden. Detective Lena Franke, on her way north to meet up with an enigmatic former colleague, stops to take on the case.

However, finding a child in the region’s vast woodlands is harder than Lena expects. She quickly realises that the disappearance is more mysterious — and dangerous — than anyone imagined.

The missing child seems to be linked to an old crime that few in the tight-knit community are willing to talk about. The question is how.

Lena must solve the riddle to save the girl’s life. But the clock is ticking, and the woods are growing darker.
And the ghostly forces that relentlessly try to break Lena’s resolve are edging ever closer.

The year is 2045. A hunger crisis is crippling the world.
The climate is running wild, cancer cases are soaring, and synthetic food corporations fight for dominance while criminal gangs flourish.

In a corner of Sweden, Claes is trying to overcome the murder of his wife. One night, he makes a discovery that makes him the target of a merciless and unstoppable organisation.

Claes finds himself holding the key to saving thousands of lives, but only if he can survive long enough to pass his knowledge on.

However, his enemies are more dangerous – and his wife’s death is much stranger – than he would ever have thought possible.

A collection of uncanny, humorous, and whimsical short stories by Erik Boman.

In Ghost of Past and Present, a man flees the city for a childhood beach, where he discovers lost and precious memories – but his memories and forgetfulness take unexpected and dangerous shapes.

Sessions tells of a near-future world in which virtual images of ourselves can be stored, and death is not always the end of an relation. Lars’s deceased wife is stuck in an afterlife he and she never expected – but can he let her go?

Once upon a time in Peter’s Special Book is a tale about a treasured storybook that features an invincible – or so he would like to think – hero who faces challenges beyond his narrative.

In Fight and Flight we meet a Kyoto businessman and an ancient samurai who face overwhelming challenges. They are separated by centuries, but joined by ancestry and a mutual watershed moment.

The Perfect Hit takes the reader to a busy train station, where a frustrated and mysterious hitman is running late for the shot of his target’s life.

The Diary of Emma Anderson tells of a wounded WW1 soldier who arrives at night to a remote New Zealand spa, a world away from the raging combat – but the battlefield will not give up its claims so easily.

A London Night Shift opens on a London Underground train, on which a librarian with a side interest in vampires debates with a group of youths – but his spontaneous lecture has unexpected consequences.

This collection features stories that vary greatly in setting and tone, but they are knit together by a common theme: They’re less about what you see around you, and more about what goes on when you’re not looking.

Some stories are set into the future; some rest in the past. Some tales dwell in whimsical and upbeat places; others hide in deeper, darker waters. You will meet businessmen, hitmen, ghosts, lovers and a certain breed of well-known fanged beings. Hopefully, you will meet them in a new light.

These stories are all about people. They are about what drives us, what haunts us, and what makes us start when something in the night goes bump – or even speaks.

Short Cuts: Stories from the Brink of Dusk

These stories tell about strange encounters, curious fates, and things that hide just out of view. You’ll meet people and creatures from imagination, myth, and weirder places.

Some are very sympathetic. Others are the extreme opposite. Not even time walks safe between these pages.

Arriving at Answers sees Rickard, a successful businessman, facing both a cruel decision and missing his flight. His career is at stake, and so is his conscience – but in a remote corner of the building, he stumbles on more answers than he expected. Because airport terminals are vast and full of unknown doors, some of which lead to very peculiar places.

Next one in Line features Frank, a high-profile gangster, who is lost. His suit is ruined, he is surrounded by whingeing fools, and he’s stuck in a seemingly never-ending queue. Unless he is wrong, he is also quite dead. And maybe about to face judgement. But Frank is a professional survivor. He gets what he wants and deserves. So far, no one has stopped him. And being in Hell changes nothing.

Treasures from Tomorrow tells of an unexpected discovery that is unravelling the world at breakneck speed. To some, it’s the happiest accident imaginable. To many others, it is their worst nightmare come alive. While chaos fills the streets of Los Angeles, veteran taxi driver Nick takes shelter in an abandoned inner city café, but a frantic man with a rifle soon breaks into Nick’s refuge and demands answers. Because mankind has stumbled on a strange well of knowledge unforeseen or unpredicted by anyone. It is a revelation that has made Nick question his past life, but also left him unafraid of death. In difference, the gun-wielding stranger in the café fears death more than ever.

In Charles, pending, the reader meets Charles Winchester, a Boston attorney with the conscience and temper of a starved alligator, is standing in a dingy bar. This annoys him, as his last memory is staring down a judge in a risky court case. And unless he gets back to defend his case, he will be in deep trouble. But the bartender serves up a revelation that soon makes Charles question the man’s – and his own – sanity. Because the bar is not a typical downtown joint, and Charles is far more lost than he first suspects. Now he needs to find a way back home, before he ends up as a permanent guest – or worse.

Travel, Mon Amour tells of Lucie Barker, who is confronted by an uncomfortable truth: either she’s losing her mind, or she is being subjected to a prank of epic proportions. She used to have money, friends and admirers, and a prestigious job – until she threw it all away for a strange chase, and a life on the road. For over a year, she’s raced from one wondrous location to the next, hoping to catch up with a trickster with unknown motifs who keeps to the shadows. And every time Lucie stops, a flight ticket is delivered to her in a way that defies belief, and makes her question her sanity. Only two things keep her together: the joy of constant travel, and the fact that she’s closing in on the stranger who beckons from around the bend. But waiting at the end of her long journey is not the answer she expects.